No Big Deal at Creaky Hall - One Star

A few weeks ago while trolling the internet for signs of the Gothic Revival, I learned that the BBC is shooting a mini-series based on a James Herbert novel, The Secret of Crickley Hall. The premise sounds right up my Gothic alley: family moves into creaky old house, mysterious manifestations ensue, family discovers decades old secret; all is well (or not well, depending on the outcome.)

But what a god-awful piece of crap this book is. I normally would not review a book on this blog if it doesn’t have anything to offer readers jonesing for a Gothic fix. Have you ever seen those one star reviews on Amazon where customers rant about how much they hated the product? That’s what this is going to be, but I’m doing it here, instead of on Amazon. If you’re not into that sort of thing, check back next weekend when I will have something to say about Tim Burton’s Dark Shadows (in theaters May 11). If you’re down for some bestseller bashing, read on.

James Herbert is trumpeted as ’s Number One Bestselling Horror Author. Really? I thought it was Clive Barker. Whatever. The Secret of Crickley Hall reads like a John Saul novel – middle class, white Anglo Saxon family, Mom and Dad, two kids and a dog, move into a “haunted” house. Slightly nerve-wracking events happen. The characters have no depth, no issues, no character. The prose is heavily padded with repetitive information (how many times do we have to be reminded that Dad is an engineer in scene after scene that have nothing to do with the fact that he is an engineer? Same with Lili the psychic. She’s a psychic.) Any suspense is created mechanically by switching scenes at the next chapter. When the mystery of the past (and reason for the haunting) is gradually revealed, it’s more disgusting than horrifying. Overall, The Secret of Crickley Hall is a young adult novel (as are John Saul’s) but the events of the past are adult in nature, and would not be appropriate for most readers under the age of sixteen. It’s just not scary, and it’s certainly not horror. It’s set in an old house and there are lots of thunderstorms. That makes it Gothic. But just a little. And Lili is psychic.

Here’s what really pisses me off. The Secret of Crickley Hall is in dire need of a content editor. There just aren’t 600 pages of story in its 600 pages. As a struggling writer who can’t get an agent to request a full or partial, I can’t help but feel if I had submitted The Secret of Crickley Hall and was lucky enough to have an agent or editor read the entire manuscript, it would have been sent back for cuts and rewrites.

Which brings me to this point: in the writing business, the publishing houses that control 99% of what you see on bookstore shelves (and include every name brand author you can think of) are referred to as The Big Six. This includes folks like Random House and Simon and Schuster, names even a casual reader is familiar with. One of the many problems with Big Six publishers is they apparently are no longer insisting on content editing for their authors, meaning that authors as diverse as James Lee Burke, Jonathan Kellerman, and Anne Rice are turning in manuscripts inferior to their early output. The books are proofread, backed with million dollar marketing campaigns, and people go to the bookstores and pay upwards of $30 USD for a name brand product. It’s no different than buying the new Nickleback CD just because you still hear a ten year old song on the radio that you like.

The Secret of Crickley Hall could have been so much better and worth the $20 USD trade paperback price ($8.99 mass market is due in August). But neither Mr. Herbert nor Macmillan Publishing care about presenting a quality product to their target market.

In all fairness, while reading The Secret of Crickley Hall I see a decent story desperate to be let out. The producers of the forthcoming BBC film see it too. Film adaptations can often be an opportunity to improve upon the source material. Here’s hoping the BBC seizes that opportunity. 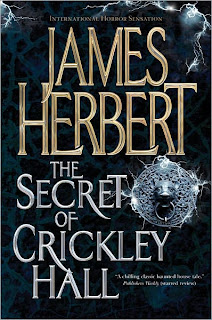 Posted by Barrymore Tebbs at 8:36 AM