Even the Man Who is Pure in Heart: The Prey by Robert Arthur Smith

When I bought my Kindle a few months ago, one of the first titles I purchased was Robert Arthur Smith’s 1977 werewolf epic, The Prey. I bought the paperback the year it came out (see scan of original copy below). The back cover didn’t say too much about the story, but one look at the first page of the prologue and I was hooked.

The Prey is an 18th Century historical adventure on a grand scale – with werewolves. It’s not without its cheese factor: the werewolves are depicted as demonic cultists, running through moonlit forests, engaging in equal amounts of sex and violence which was compelling the year it was published but now reads a bit on the tame side.

Our hero, Morivania, returns to the ancestral castle in to find a sinister figure, Luther, dressed as some sort of quasi-satanic high priest, has taken control of the castle and exerts a powerful influence over Morivania’s father. Luther attempts to induct Morivania into his diabolic wolf cult via the seductive beauty, Ingrid. 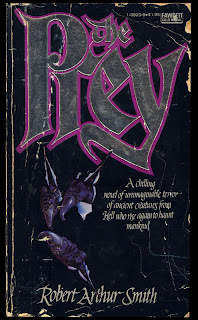 The first part of the novel is my favorite. Here, Smith pours on a heavy, Gothic atmosphere, and with passages such as this it is no wonder I have turned to portions of this book repeatedly over the years for inspiration in my own writing:

When I came to my senses, I found myself seated on a stone floor with my back to a wall. Beyond me, Luther, Ingrid and my father were huddled around a taper, which gave off barely enough light to pick out the details of our surroundings.

We were in the catacombs.

You can imagine the effect of such a place on a mind already turbulent with pain and with what I knew now had been drugged wine. All around us, amid the coffins and bones of my ancestors, were the skeletons of poor wretches who had been made to suffer for one crime or another.

Luther had observed my wakefulness, and gave me time to feel the presence of these things. Then he laughed sharply, his long teeth showing yellow against the grey of his skin.

"Do you begin to understand," he demanded of me. "Here is your origin, Morivania! You are one of us."

I was disgusted and horrified. I had never seen this odious part of the castle before. I had always known certain of my ancestors had been ruthless and brutal, but to see with my own eyes evidence of their unnatural cruelty was insufferable. I refused any part in their crimes, and yet their blood ran in my veins; their riches, torn from the bleeding fingers of people less strong than they, trickled down through generations of my family into my own hands, putting food in my mouth, clothes on my back.

The castle goes up in flames and Morivania flees with Luther and his henchmen in hot pursuit. Now The Prey cranks into high gear as an adventure novel. True to 18th century adventure novels, it becomes highly episodic, with our hero running into one scrape after another. Naturally, he winds up in where he is caught up in the peasant revolts and haplessly winds up in the Bastille with a nasty bump on his head. Smith employs the same baroque style to describe the stench and violence in the city…and then it’s off on another wild chase through the French countryside.

Readers who enjoy the old-school Gothic writing style should do themselves a favor and track down The Prey. It’s available in eBook form for around 2.00 USD on Amazon and Barnes and Noble, and the original Fawcett Crest mass market paperback and later trade edition are easily found on eBay and Half dot com.

I was now entirely under her spell. I could divine her wishes without so much as a word from her lips. I felt myself turning and starting back for the castle. Her strong fingers moved from my hand to my arm as she kept to my side on the track.

I had no idea if her wolf friend was following us, but I lacked the strength of will to turn my head and see.

I remember nothing of the trek back to the castle. I knew only that this woman exercised the power of a witch over me. She could do as she wished; I was helpless to stop her.

We crossed the courtyard and entered the castle. No one challenged us; the servants were all asleep, and the dogs had not returned to awaken anyone with their howls.

At the top of the stairs that led to the cellars, the woman sniffed the air. Her cowl had fallen back on her shoulders, revealing a mass of unkempt hair as black as pitch. She gave me a long, penetrating gaze as though to reinforce her power over me, then she tore open the cellar door and made her way down in the darkness.

I was compelled by the force of her dark arts to follow, though I did manage to snatch up an oil lamp from a chest in the hall.

I followed like an automaton as she led me straight down to the catacombs. By now I was nearly out of my wits with terror, but my limbs were no longer in my command. I could do nothing to escape.

She took the lamp from my hand, set it down on a table, and turned to me.

I half expected her to attack me with a knife hidden about her person, or summon the wolf and command it to slash my throat, but she did neither.

Instead, she stepped out of her robe and stood before me, utterly naked.

I had no time to react; in an instant, she was upon me, possessed by a frenzy I had not imagined possible in a human being.

Darkness took my mind.
Posted by Barrymore Tebbs at 8:02 AM