Son of the Beast: Rosemary's Baby

Rosemary’s Baby is one of those rare instances where the novel and film exist on equal footing. Ira Levin’s streamlined suspense thriller was a huge bestseller in the mid-sixties. In hiring shlockmeister William Castle as producer, Paramount Pictures probably wasn’t counting on much more than a standard Gothic potboiler. For reasons known only to him, director Roman Polanski chose to pursue a very literal adaptation of the novel in his self-penned screenplay. 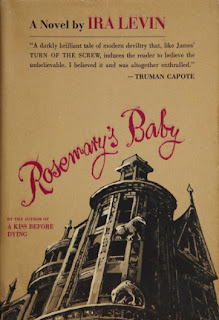 Picture if you will, those of you who are as familiar with the scenes in Rosemary’s Baby as you are with other favorite classics – or The Godfather – the scenes from Levin’s novel, however seemingly unimportant, reproduced in Polanski’s film:

A workman at a sculptured green door marked 7B looked at them and turned back to fitting a peepscope into its cut-out hole.

Mrs. Castavet was wrapped in light blue, with snow-white daubs of gloves, purse, shoes, and hat… He was dazzling, in an every-color seersucker jacket, red slacks, a pink bow tie, and a gray fedora with a pink band.

Rosemary looked outside the door. She could see only the end of the living room that was bridge tables and file cabinets; Guy and Mr. Castavet were at the other end. A plane of blue cigarette smoke lay motionless in the air. 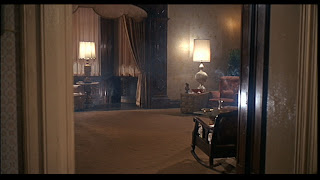 This last one is one of my favorite shots in the movie. Only after seeing the movie or knowing the story do we realize in retrospect that this is the scene wherein Guy Woodhouse seals the fate of his unborn child. This shot also establishes an ongoing motif in the film, that of feral eyes watching the proceedings. Notice how many times two lamps, or two lighted windows in another wing of the apartment building appear as eyes. While the book and movie follow the exact same story line to the point where the dialogue is lifted verbatim from the novel, through this and other cinematic techniques Polanski is able to create a palpable sense of paranoia which isn’t present in the novel. The book reads as a tongue-in-cheek parody of a Gothic Romance with Guy and Rosemary moving into the haunted house despite the warnings of the superstitious villager, appearing here in the character of Rosemary’s friend, Hutch.

Are you aware that the Bramford had a rather unpleasant reputation around the turn of the century? It's where the Trench sisters conducted their little dietary experiments. And Keith Kennedy held his parties. Adrian Marcato lived there too. The Trench sisters were two proper Victorian ladies - they cooked and ate several young children including a niece. Adrian Marcato practiced witchcraft. He made quite a splash in the 90s by announcing that he'd conjured up the living devil. Apparently, people believed him so they attacked and nearly killed him in the lobby of the Bramford. Later, the Keith Kennedy business began and by the 20s, the house was half empty...World War II filled the house up again. They called it Black Bramford. This house has a high incidence of unpleasant happenings. In '59, a dead infant was found wrapped in newspaper in the basement 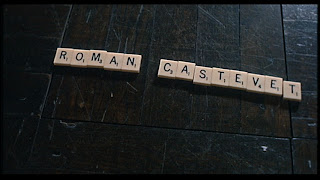 This speech from the screenplay sets the tone for this house of horrors into which Rosemary and Guy have moved. And for anyone who has lived under a rock for the past forty-five years or is simply too young to have caught wind of this classic, Rosemary winds up pregnant after dreaming of being raped by the Devil, and rapidly dissolves into paranoia believing the clan of geriatric neighbors in her apartment building are actually a coven of witches intent on sacrificing her unborn child to the Dark One.

During the 1960s and 1970s, Ira Levin wrote a handful of suspense novels which have gone into the public consciousness both from written versions and film adaptations. We all know what it means to be a Stepford wife, we all know what the boys from Brazil are, and we certainly know the fate of Rosemary’s baby.

And we certainly know what happened to the horror film in its wake. Rosemary’s Baby grew up to be the son of Satan in The Omen and a thirteen-year-old girl possessed by the African demon Pazuzu in The Exorcist.

In a 2002 interview with the Los Angeles Times, Levin expressed his dissatisfaction with the tide of popular Satanism his work appeared to unleash.

“I feel guilty that ‘Rosemary’s Baby’ led to ‘The Exorcist,’ ‘The Omen.’ A whole generation has been exposed, has more belief in Satan. I don’t believe in Satan. And I feel that the strong fundamentalism we have would not be as strong if there hadn’t been so many of these books. Of course, I didn’t send back any of the royalty checks.” 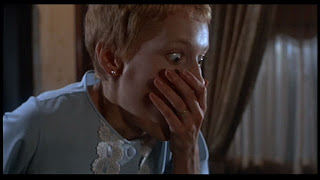 If you have never read Rosemary’s Baby or haven’t read it in awhile, what better time of year to pull it off your shelf, check it out at the library, or buy it via One Click for your Kindle (currently 2.99 USD). Pop in the movie and follow along. If you’re like me and a couple of my more colorful friends, you’ll enjoy saying the dialogue along with the film.

You’re in Debrovnik. I don’t hear you.

Shh, I think I hear the Trench Sisters chewing.

Posted by Barrymore Tebbs at 6:12 AM