1963 found both Christopher Lee and Peter Cushing unavailable for filming, so Hammer forged ahead on the next Dracula project. Sans the Count and Van Helsing, the script went through several rewrites, incorporating elements previously considered for Brides of Dracula. The result, Kiss of the Vampire, is once again a unique story line that may not have seen the light of day if it weren’t for the studio’s rebellious stars. 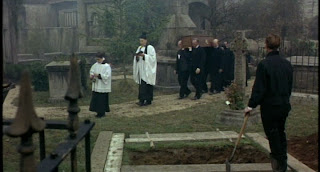 The proceedings kick off in high gear with the usual funeral procession into a desolate cemetery. Before the parson can shovel dirt onto the casket, a grim faced fellow comes along and drives a shovel straight through the coffin lid and the screen bursts with a font of Technicolor blood.

The story then follows the trail of a pair of newlyweds, Marianne and Gerald Harcourt, who run out of petrol while honeymooning by motorcar in . After seeking shelter from a sudden summer storm at a village inn, they are invited for dinner to the home of Dr. Ravna whose castle overlooks the village below. Our newlyweds are just as naïve as Marianne in Brides of Dracula, flies unwittingly drawn into the spider’s web.

Ravna has a lush daughter, Sabane, and son, Charles who knows how to hypnotize the ladies with his seductive piano playing. Along the way we learn that Ravna and his offspring are, of course, vampires who lured the innkeeper’s daughter into their cult, and would have the young girl buried in the opening scene as well if not that her father, Professor Zimmer had driven his shovel through her heart to keep her from rising from the grave. 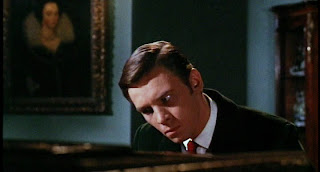 Zimmer is a worthy stand-on for Van Helsing, a man tormented by drink and the loss of his daughter, but well versed in folklore and the ways of the occult. Wait till you get a load of the inside of his cottage.

Invited to a lavish masquerade ball at Castle Ravna, Marianne is soon waylaid to be inducted into the cult of the undead while poor Gerald wakes up with a hangover and a vast conspiracy to make him believe that his bride never existed. The ball is a stunning set piece, one of the most remarkable scenes of any Hammer horror film whose casts are notoriously sparse. Like its predecessor, Brides of Dracula, Kiss of the Vampire bursts from the screen in dazzling colors, turning the Hammer version of into a kind of vampire storybook setting. 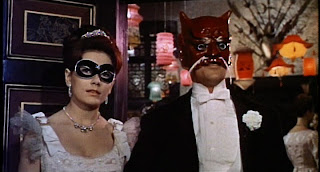 But the true piece de resistance of the film is the destruction of the vampire cult when Professor Zimmer unleashes a horde of bats, evil against evil. Some of the effects are cheesy, but the animation is outstanding and the scene will remind many viewers of the attacks in Hitchcock’s The Birds, released the same year.

Kiss of the Vampire comes with The Midnight Room Vampire Season Seal of Approval. 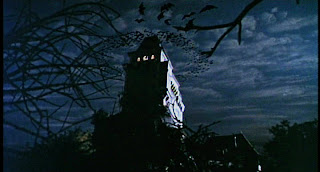 Posted by Barrymore Tebbs at 8:10 PM