The Midnight Room is on a brief hiatus. Commentary will return next week. In the meantime, please enjoy this vintage 1955 interview with Bela Lugosi upon his release from the State Hospital where he was treated for heroin addiction.

Posted by Barrymore Tebbs at 5:37 PM No comments:

All Heads Turn When the Snake Woman Slithers By


Have you ever read a book that everyone is talking about, which everyone says you “have to read,” which is the latest international best seller soon to be a major motion picture, and you plunk down your hard earned cash and wind up wondering what all the hoopla is about? I’m not talking about 50 Shades of Grey, but an overblown piece of Southern Gothic reptilian nonsense hailed as one of the 100 Greatest Horror Novels of All Time.

And before you read any further, I must warn you this blog post contains spoilers. 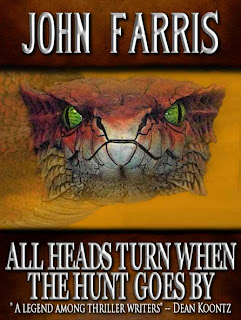 All Heads Turn When the Hunt Goes By has been on my radar for years, but judging from the cover of the 1978 Popular Library paperback, it’s no wonder I passed this book up at the time.

My interest was really piqued in the past year when I read Will Errikson’s review at Too Much Horror Fiction. I usually feel in sync with Will’s recommendations, so I made a concentrated effort to get my hands on a copy. Starting bid on eBay for a hardback copy is $45.00 USD. Ain’t gonna do it.

Imagine my delight when I plucked it off the table at the local annual library book sale in June for one dollar. I even let out a book-nerd shriek. I dropped whatever I was reading at the time and dove right in.

Twenty-four pages later, I was ready to claw my eyes out with boredom and confusion. This is what I think happened in the opening "scene": During a swank military wedding, Clipper Bradwin takes complete leave of his senses and slaughters his bride and everyone in sight while the chapel bell silently strikes the walls of the bell tower causing the survivors of the massacre to believe they are in the middle of an earthquake. Sounds like an exciting start to a novel, doesn’t it? Farris’ writing is so lifeless and dry it took me days to get through this scene…and weeks to get through the remaining 300 some pages. After the initial excitement of finding my dream book for a dollar wore off, I couldn’t read more than three or four pages a day before my eyes would cross and I went off in search of something more gripping. Somewhere along the way someone declared this style of writing “literary” and the fanboys lined up. You call it literary, I call it boring.

The “action” (and I use the term loosely) was all over the globe but consisted mostly of ill-defined characters talking at length about pagan practices in darkest Africa. Hmmm, I wonder what the natives practice down there? Could it be…Voodoo? Of course! It’s a Southern Gothic about a family curse earned when some white guy took a wrong turn in Africa all those years ago and now the beautiful sexy Nhora turns into this sort of snake goddess and does things with horses that would incite all those soccer moms reading 50 Shades to cry “That’s disgusting!” Indeed, it is.

I have to admit that I knew going in how this book was going to end. It’s hard not to when a book is considered a “classic” and everybody and his brother has reviewed it on Goodreads. And you know what? I’m grateful for all those plot spoilers. Otherwise, if I had managed to actually finish the book without them, I wouldn’t have had a clue what I had just read. When all was said and done all we have is a book about a chick who turns into a snake wrapped up in pseudo-intellectual clothing. Literary my ass. Wasn’t this sort of thing already a cliché in the ‘70s?

This was done years early, better, and more entertainingly, by Hammer Films. The Reptile was shot in 1966, back to back by director Don Banks and utilizing the same sets as Plague of the Zombies. These two films find Hammer studios at their most Gothic and most meaningful. Both films explore the evils of British colonialism. Here, the theologian Dr. Franklyn had been snooping around the wilds of primitive places such as India, Borneo, and Jakarta. But arrogant “civilized” white men have a knack for sticking their noses in other folks’ business where they don’t belong. The primitives strike back in the form of a curse on Franklyn’s beautiful daughter, Anna.

Anthony Hinds’ script plays out as a traditional mystery, but the title and lobby card gives it away. Still, it’s a lot of fun when Jacqueline Pearce shows up in full reptile make up, hissing and fanging unwary folks in the jugular. 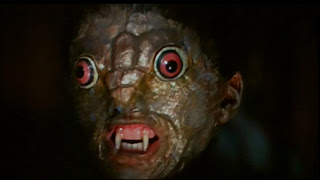 Hammer’s films, and The Reptile in particular, make no pretensions to be taken seriously. They’re all about over the top Gothic fun. And fun is what’s missing from John Farris’ All Heads Turn When the Hunt Goes By.

But don’t just take my word for it. Curious readers no longer have to drum their fingers waiting for affordable copies on eBay. Farris has just released the book in eBook format for a measly 3.99 USD. And you can’t beat that snake with a stick.

Email ThisBlogThis!Share to TwitterShare to FacebookShare to Pinterest
Labels: All Heads Turn When the Hunt Goes By, Hammer Films, John Farris, Plague of the Zombies, Southern Gothic, The Reptile

Poor Janet. When she was a child, she witnessed her mother stab her father to death…on her birthday no less! Scarred for life, Janet has a rough time of it, with recurring nightmares of wandering through the darkened corridors of the local insane asylum only to encounter Mummy, a slobbering, strait-jacketed maniac with rats nest hair and bulging eyes, straight out of Nuthouse Lunatics 101.

So begins Nightmare, yet another entry in Hammer’s foray into the world of little Gothic psycho thrillers, where Jennie Linden proves her acting chops as Janet, screaming and running around the shadowed halls of High Towers, the ancestral home she will inherit when she turns eighteen (looking suspiciously like the castle set from Dracula: Prince of Darkness.).

Janet has been away at school, but her frequent nocturnal screaming fits aren’t good for the other girls. Accompanied by one of her teachers, she is sent home to rest. Janet has a guardian and executor of the estate, the playboy Henry Baxter, who is away on business and so has hired a psychiatric nurse to be Janet’s companion until his return. Things start to heat up when Janet starts having dreams and visions of the World’s Ugliest Woman (Clytie Jessup who also happened to play the ghost of Miss Jessell in 1961’s The Innocents) standing around looking uber-creepy. You can tell she’s uber creepy because she has a scar on her face. Whoever or whatever this woman is, her frequent appearance pushes Janet to the brink of hysteria. Soon, she too is ratting her hair and running around barefoot, brandishing that old psycho standby, the butcher knife, and periodically breaking into fits of spittle-spewing screaming. And that’s just the first twenty minutes.

In Nightmare, screenwriter Jimmy Sangster offers a more mechanical script than his other thrillers, and when the multiple Scooby-Doo endings start to roll out in waves, its enough to make even this die-hard Gothic fan roll his eyes. I guarantee you won’t be able to predict any of these endings, and you probably won’t buy them as plausible, either. But if you like stark black and white Cinemascope shot in old dark houses with lots of screaming and peeking around doorways, this one is another winner.

Posted by Barrymore Tebbs at 7:01 PM No comments:

This one’s my favorite of the bunch. Always has been. It’s Gothic to the core, from the opening imagery of the cliffs along the coast of Dorset, , to Janette Scott’s histrionics as she teeters on the brink of insanity… and incest.

But I get ahead of myself.

Paranoiac is the story of a wealthy family with more than one skeleton in the family closet. Eleanor Ashby is a fragile beauty, a walking Petri dish of mental disturbance. But if Eleanor is a psychosis ready to happen, brother Simon is the full bore psychotic, an alcoholic playboy who threatens his foes with handfuls of darts and drives his Jaguar roughshod over Aunt Harriet’s rose bushes. Simon is played by a remarkably young Oliver Reed (here aged 25) at a fever pitch of mincing, smirking, staggering, and wide eyed horror when he realizes his brother Tony has returned from “the watery grave.” You’d be shocked too, especially if you thought you’d killed the boy ten years ago and were only waiting for dear sister to be carted off to the booby-hatch so you can inherit the family millions. Well, it’s only a half a million, but who’s counting?

Lovely Janette Scott holds her own against Oliver Reed as Eleanor, especially when she realizes she’s fallen in love with Tony Ashby. Dashing Alex Davion is serviceable as “Tony” who, understandably, has the hots for Eleanor, but forgets he’s actually an imposter and allows that fatal kiss. “OMG! Unclean!” cries our heroine and makes a mad dash for the nearest pair of scissors. Cue melodramatic crescendos.

Confused? You should be. You need a flow chart to keep up with the relationships… and we’re only talking about three characters. That’s because Paranoiac brings us more script gymnastics by the prolific Jimmy Sangster, this time loosely adapting the 1949 novel, Brat Farrar by Josephine Tey. It’s all a bunch of good, dirty fun directed in widescreen black and white by the great cinematographer Freddie Francis. We get some great Gothic shots of Scott in wind-blown nightgown scampering barefoot among the terraced gardens, plenty of batty dialogue, and true to Hammer style, staccato bursts of violence, all wrapped up in a neat 80 minute package.

This is a good one for a rainy Saturday afternoon, or late at night when you can't sleep. Or anytime you need a strong dose of Psychological Gothic, for that matter.
I've been drinking. And now I'm going to drink some more.

Posted by Barrymore Tebbs at 3:52 PM No comments: