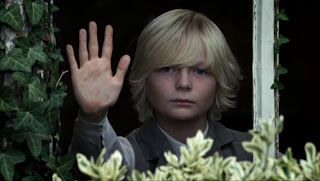 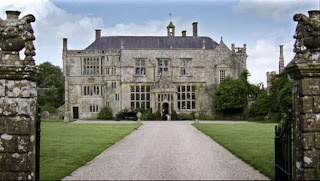 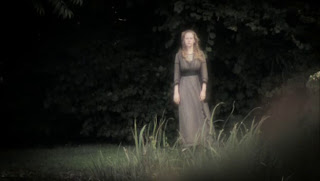 Or you can be smart, and leave well enough alone.
Posted by Barrymore Tebbs at 8:27 PM No comments:

I’m not certain how it began, but I imagine it went something like this:
It was late afternoon on a sunny, spring day and I had gone to another fourth-grade friend’s house to play after school. His mama was sitting in the recliner in the living room, smoking, watching a soap opera on the color TV. In those days, that’s what moms did. They stayed home all day. At my house, we didn’t have a color TV, my parents didn’t smoke, and my mother didn’t watch soap operas. Spooky music rattled out of the tinny TV speaker and people with anxious faces moped glumly around the living room of an immense, old mansion. And who was the scary guy with the weird haircut and the wolf’s head cane? Some people on the show were afraid of him. Others seemed to love him. His name was Barnabas Collins. What kind of name was that?
More than anything else, Dark Shadows was a product of its time. It was the mid-to-late 1960s. The Viet Nam War was in full sway, with gore being broadcast into living rooms on the evening news with frightening regularity. There was unrest on the home front as well in the form of race riots and campus rebellions. Teenagers, much to the horror of their parents, were tuning in, dropping out, and turning on. “What’s your sign?” was a common pick-up line and indicative of a movement where everyone seemed to be into Astrology and other more insidious manifestations of the occult.
It’s no small wonder that in the midst of all the madness, Dark Shadows became a runaway phenomenon with grade-schoolers and their moms. Who else would be found glued to the TV at 4:00 on even the sunniest of days, the curtains drawn, being sucked into the gloomy world of Collinwood? Today, ask anyone over the age of fifty about Dark Shadows and the first words out of their mouth will be, “I used to run home from school…” and once I was hooked, so did I.
Dark Shadows fans know this story well, but it bears repeating. Dark Shadows went on the air in June 1966, but despite being a Gothic novelty act on daytime TV, the ratings flagged. The story began as a television retread of the popular Gothic Romance novels of the time with a governess, Victoria Winters, taking a post at mysterious Collinwood which had no more menace than any other old house with creaky floorboards and drafts near the windows that sometimes made the curtains billow inexplicably. But about six months into the first year, with the threat of cancellation looming, producer Dan Curtis decided to shift the focus from Jane Eyre to Dracula.
Enter Jonathan Frid, a classically trained Shakespearean actor who had one prior TV credit as a psychiatrist on another soap opera. The cousin from , Barnabas Collins, was only meant to be in the series for a month of weekday afternoons, but once he started sneaking into bedrooms and biting the necks of the female members of the cast, the ratings soared.
And soared, and soared. Looking back at the craggy face of Jonathan Frid in makeup, it is somewhat hard to believe that Frid became a sex symbol, but consider that in his day, Bela Lugosi was a sex symbol as well. And given the continued success of Barnabas’ grandchildren, Lestat de Lioncourt and Edward the Sparkler, it is clear that women are eternally and irresistibly drawn to a bloodsucker.
But what about the boys? At my school, other little boys on the playground played at being Captain Kirk and Mr. Spock during recess. I played Barnabas and bit the little girls on the neck. Who do you think had his priorities in the right place?

It is no secret that Dark Shadows has had a lasting influence on my life and art. I proudly display all 33 of the vintage Dark Shadows paperbacks in an old fashioned wire bookrack. I have all 1,125 episodes on VHS and DVD, I have the Robert Cobert soundtrack CDs, and I have autographs from three of the show’s stars, including Frid’s, from book signings.
My early experiences with Dark Shadows eventually led to harder things. I discovered Bela Lugosi and Boris Karloff. In my teen years I discovered Hammer Films and began to read Gothic writers such as Shirley Jackson, Lovecraft, and Poe. Today I am a writing a style of Gothic fiction which has its roots in the stories which inspired the plot arcs on Dark Shadows.
Jonathan Frid passed away quietly at the age of 87 on Friday, April 13th. There was no funeral, and there is no memorial service planned by the family. The news was withheld from the media for seven days, breaking on the internet early this morning, Thursday, April 19th.
Tonight, fans across the country will be lighting candles, holding séances, donning their vampire capes, popping tapes in the VCR, and remembering one of the 1960s quintessential pop icons.
Thank you, Jonathan Frid, for a lifetime of terror, intrigue, and a boat load of unintentional laughs. You had a good run. 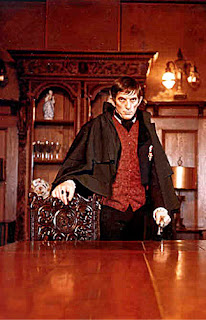 What could possibly be scary about a yellow scarf?

I feel I've been neglecting my readers lately. It hasn't been because of a lack of interest. I'm feeling full bore Gothic these days, trying to find something really great to read and review (I tried Sarah Waters' The Little Stranger, but that wasn't it). I finished another draft of my forthcoming Gothic Romance, The Haunting at Blackwood Hall, in February and wrote Black Valentines in about three weeks time, turned around and cranked out another shocker, this one called The Yellow Scarf. My early beta readers reported variously that it creeped them out, and it was really scary. I'll let you be the judge of that.

I've read interviews with Stephen King for years where people always ask him where he gets his ideas and he has some down-home comeback about getting them at the corner drugstore. I've started hearing a variation, "How do you come up with this stuff?"


The Yellow Scarf is three things that converged together. I can identify two of them. A few months ago I was reading some old Les Daniels paperbacks, one of them was No Blood Spilled, which alluded to the murderous Indian cult of the early 19th century known as Thugs. If you know anything about these followers of Kali Ma, you will understand the title reference going in.

Somehow (and for the life of me I can't remember how it happened) the Rolling Stones concert in Hyde Park in London in 1969 got thrown into the mix. True story. The Yellow Scarf is not. It's fiction. I hope you enjoy it, and let me know what you think. Below is the opening:

The house waited.
The rains were heavy that spring. The grounds around Hampton Close were sodden, the canopy of trees so lush and full that swollen limbs prohibited any hope of sunlight from ever reaching the floor of the forest primeval. To walk the wood surrounding Hampton Close was a hazard to the traveler. The flora had rotted into a cesspool of rank detritus leaving the ground a morass of wet leaves and rotten undergrowth. Beneath, benighted creatures roiled and squirmed, thriving on the sustenance of warm decay which enfolded them in its womb.
With the coming of summer, and the heat, the house became a breeding ground for that which thrives in darkness. Not tangible organisms with defined shape and form and measurable weight, but those things which grow just across the border of consciousness in that twilight area accessible only through dreams and precognition, creativity and madness. The house was alone with itself and in its loneliness it turned within and beheld its own living darkness.
The house smiled.
Posted by Barrymore Tebbs at 5:34 PM No comments:

Jane Eyre is unquestionably the grandmother of the modern Gothic Romance. I have at least four film versions, and have room on my shelves for more in the future. My favorite is the 2008 BBC miniseries, but by far the best looking is the 1943 classic starring Orson Welles and Joan Fontaine. One of my favorite blogs is The Obscure Hollow, a blog dedicated to posting screen grabs from Gothic films, mostly focusing on the set designs. No commentary, just frame after frame of Gothic eye candy. So,to avoid being accused of ripping off a great idea, my version will feature the occasional commentary. 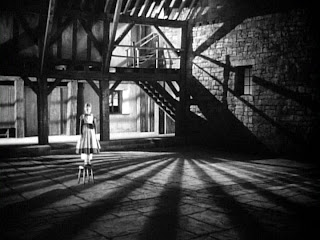 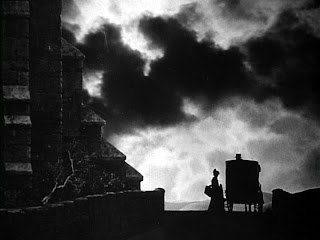 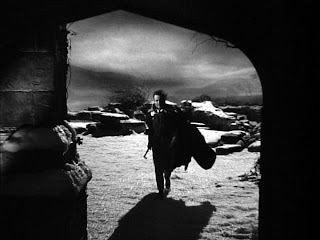 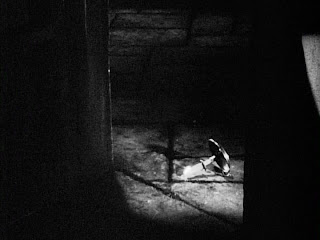 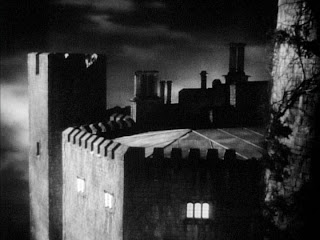 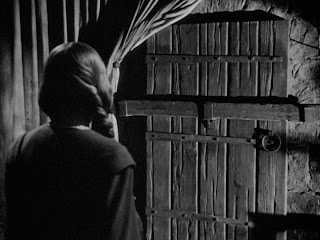 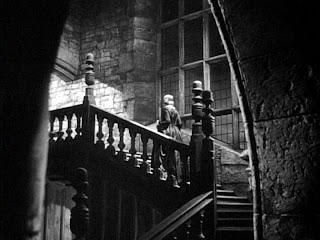 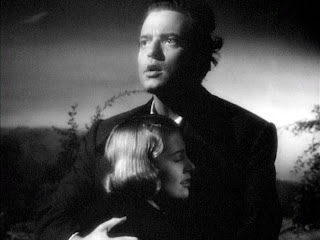 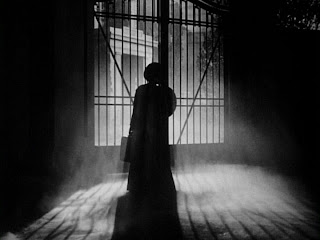 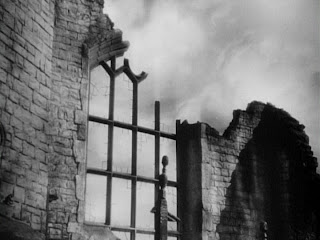 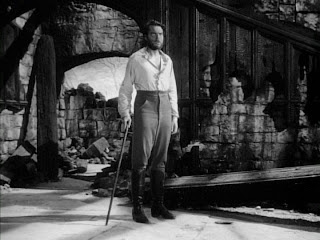 Posted by Barrymore Tebbs at 5:04 PM No comments: