I can’t pronounce it either. But Bela Lugosi can. Listening to Lugosi’s fractured English in a non-Dracula role is one of the joys of this 1934 Universal horror film, especially when he intones the classic line, “Supernatural perhaps – baloney, perhaps not.”

The Black Cat owes next to nothing to the Edgar Allan Poe story from which it draws its title, yet somehow manages to capture the essence of Poe in its strange tale of obsession, paranoia, and revenge. 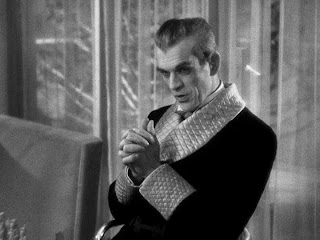 During a raging storm (is there any other kind?), Dr. Vitus Werdegast (Lugosi) and a hapless American couple who are his traveling companions to Visegrad, find themselves seeking shelter at the home of Werdegast’s arch enemy, the architect Hjalmer Poelzig (Karloff) who made off with Werdegast’s wife while Werdegast was in a prison camp for the past fifteen years. The minute we lay eyes on Poelzig we know this guy is up to no good…in a bad, bad way. I mean, look at that haircut, guyliner, and lipstick. Eww.
Under Edgar Ulmer’s script and direction, Poelzig is as serious a diabolic madman as has ever been put on film. Poelzig’s house is a modern expressionistic nightmare perched atop the ruins of which he had commanded during the war, an army which he ultimately betrayed to the Russians causing the death of thousands of Hungarian soldiers. Poelzig lives on top of the graveyard of the soldiers he led into death. 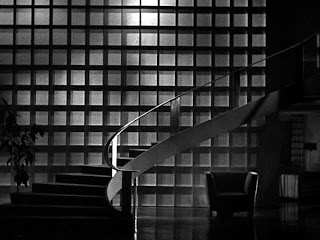 If that isn’t evil enough, wait till you get a load of the former wives and lovers he keeps in suspended animation, displayed in glass boxes which he likes to view while stroking the titular feline. You call that a collection? I call it fifty shades of necrophilia. You don’t think he just looks at them do you? 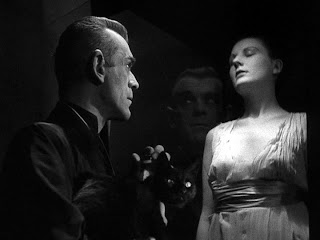 Werdegast is no slouch himself in the weirdo department. Though his characters is the protagonist, his performance is laced with menace, fear, lust, and a thirst for revenge involving a scalpel. Early in the film he engages in some inappropriate touching of the young bride of his traveling companion, a gesture so creepy and pervy it makes me wonder how it made it past the censors. According to the events surrounding the film’s production as detailed at 366 Weird Movies, The Black Cat was heavily edited before its release. Most of the old Universal monster films leave us with a sense of fun. This one makes me want to take a shower after I’ve watched it. 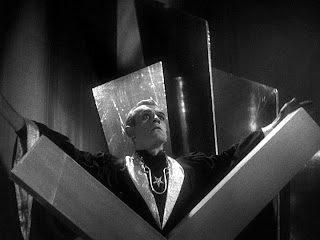 The plot is occasionally hard to follow which may be due to these edits. Nevertheless, things build to a devilish climax when it becomes clear Poelzig and his disciples are about to celebrate the Rites of Lucifer and he intends to sacrifice the innocent American bride. The ritual room is good stuff, complete with socialites in black cowled robes, Poelzig sporting a pentagram amulet, and a piece of set decoration that looks suspiciously like an inverted cross. Strong stuff in 1934, it still has hypnotic power over the viewer today.

If your ideas of Karloff and Lugosi begin and end with Frankenstein and Dracula, prepare yourself for a truly bizarre Gothic thriller. The Black Cat is available on DVD in The Bela Lugosi Collection along with other lesser known Universal horror films The Murders in the Rue Morgue, The Invisible Ray, and Black Friday. 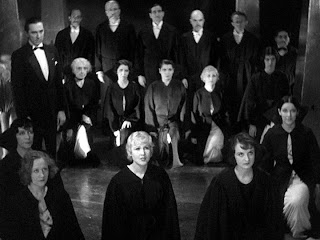 Posted by Barrymore Tebbs at 7:59 PM