It’s been awhile since The Midnight Room took a trip to the used paperback bookstore. This week I’d like to introduce readers to the terrifying Gothic imagery of George Ziel (1914-1982). Whereas artists like Harry Bennett and Lou Marchetti emphasized the romantic elements in their Gothic Romance paintings, George Ziel emphasized the Gothic. His heroines wear expressions of palpable fear, eyes often wide with terror. If that isn’t enough, he frequently incorporates other Gothic and occult elements including black cats, skulls, candles, and swarms of black bats that skitter across the painting. 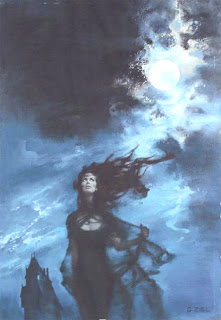 Ziel’s images of death and fear are so striking that he employed virtually the same style for his series of thirty-one cover paintings for Jove’s paperback reprints of mystery novelist Ngaio Marsh, as well as covers for the George Simenon reprints for Pocket Books. 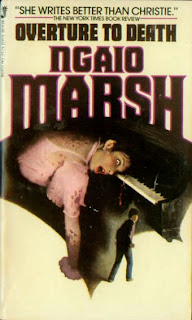 Gothic Romance collectors, however, are more familiar with his work for Paperback Library where he produced outstanding covers for titles by such prolific writers as Christine Randell, Dorothy Daniels, and Marilyn Ross, often delivering three to four paintings a month. In an era when writers could not produce original Gothic Romance novels fast enough, publishers such as Paperback Library often reprinted older mysteries and some classic works, sometimes with new titles, always with an eye toward attracting the readers who sought these books ravenously, month after month, for nearly two decades. 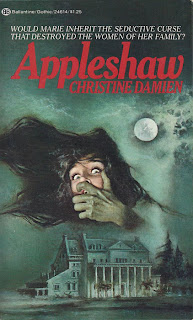 Archivist Lynn Munroe presents an extensive portrait of Ziel’s life and work at Lynn Munroe Books wherein he states: “Ziel appeared to have tapped into our darkest fears and nightmares, and presented them on vivid paperback covers. Some of them were romances, some were mysteries; all of them were haunting. The average reader, with no knowledge of Ziel’s past, could only wonder. To those who knew his story, the signposts were all clearly marked. Like all great artists, George Ziel drew on his own experiences and memories, his own visions and nightmares, to infuse the horrifying world of his best cover art. Although he rarely signed his name or received a printed artist credit, he nonetheless became a true modern master of horror.” 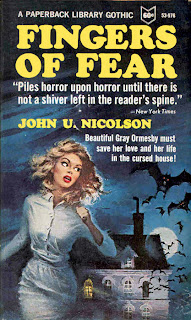 The story of Ziel’s past is as horrifying as any of his covers. He was born Jerzy Zielezinsky in in 1914 where, as a youth he was relegated to the Warsaw Ghetto before ultimately being shipped off to .

As “an artist; he felt a powerful need to create art that the restrictions at could not destroy. Paper and pencils were forbidden, so Jerzy used to sketch on pieces of scrap paper using bits of charcoal. He made sketches of his fellow prisoners and of life in the camps.  When was liberated, Jerzy was taken to a hospital. During his convalescence there, he turned his rough sketches into drawings and created new images from the memories burned into his mind.”

Is it any wonder then that Ziel’s covers for Gothic Romance paperbacks are infused with more dark imagery than the majority of his contemporaries? 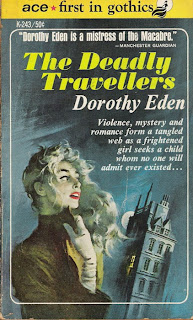 For more book cover goodness, visit the George Ziel checklist at Munroe’s website. I’d also like to personally thank Munroe for allowing me to use material from his exhaustive overview of Ziel’s life and work. 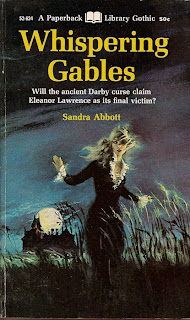 Posted by Barrymore Tebbs at 8:21 AM