What do you get when you cross a Gothic Romance with Creature From the Black Lagoon? Twentieth Century Fox’s 1959 B Movie classic, The Alligator People, though it tries hard to be an A List picture. It’s got some great black and white photography shot in extra-wide Cinemascope, and Roy Del Ruth’s direction keeps it afloat… plus there’s Beverly Garland on hand to lend the picture respectability. It’s all good gothic horror movie fun until the last fifteen minutes when it descends into Man In a Rubber Suit Sci Fi nonsense. Let’s take a look.

Things start off pretty well with a framing device in which Jane Marvin () submits to a sodium pentothol induced trace and begins to regale her psychiatrist with a fantastic yarn about her alter ego, newlywed Joyce Webster. Methinks the studio needed to pad the running time of the movie which, even with the unnecessary prologue and epilogue clocks in at a paltry 74 minutes.

Joyce and her husband, Paul, are traveling by train to their honeymoon destination when Paul receives an urgent telegram. Paul deboards the train to make a mysterious phone call, only to vanish, leaving Joyce to prowl the train compartments looking for her husband like a cat in heat. Okay, I made that last part up. But she does go on a months-long search to find the missing husband. Of course for the sake of plot convenience, she married Paul without knowing a thing about him. But an old letter from Paul’s college days gives Joyce a ray of hope with a swampside address, The Cypresses.

Joyce arrives in Bayou Landing, suitcase in tow and hangs out at the deserted train station relying on the kindness of strangers to give her a ride to her ultimate destination. Who should that stranger be but none other than half-drunk gun-happy hook-handed Cajun Mannon, played to the hilt by Lon Chaney Jr. Mannon is a gator-hater at heart, and to prove it he tries to run over one of our web footed friends on the way to drop Joyce off at The Cypresses.

Joyce has some nerve, just showing up at a creepy old plantation house without an invitation. Here’s where the plot starts to get iffy, and the dialogue even worse. Mistress of the house, Lavinia Hawthorne, is openly hostile towards a stranger barging onto her property looking for a missing husband (and rightfully so) but she foregoes better judgment and extends Joyce some good old Southern hospitality in the form of an invitation to spend the night… and then locks her in her room.

Deny it though she will, the audience knows full well that old lady Hawthorne is in fact Paul Webster’s mother, and here comes our buddy Paul in a trench coat with some nifty alligator skin makeup sneaking in and out of the house under cover of the night. He needs the trench coat because it rains all the time in Bayou Landing.

Somehow I seemed drawn to the music. A theme that I had heard before. Somewhere. Who else lived in this strange household? Who could be playing in the dead of night? I couldn’t rid myself of the premonition that each step took me closer to the secret contained in this shadowy house.

Next thing you know, Joyce hears mysterious piano playing in the night and is slowly drawn in a dreamlike trance to the music room. She opens the door to the music room and sees the piano player in full light but somehow she doesn’t recognize her husband’s shape and features. I always scratch my head over that one, but the next sequence more than makes up for it. The Alligator People frequently forgoes any sort of logic in favor of action and suspense.

Joyce begins to get suspicious that the mysterious night visitor is none other than her missing husband (ya think?) After another late night serenade at the piano, Paul goes running into the dark and stormy night, Joyce following in hot pursuit. Switch Beverly Garland to the ripped, rain-drenched costume, the one that shows plenty of thigh and cleavage; cue the rain machine, unleash the trained alligators, and …Action Lon Chaney!

Things get really wild at this point with Mannon rescuing Joyce from imminent alligator attack one minute, dragging her into his swamp side shack were he proceeds to slap her hard enough to render her unconscious so he can have his way with her the next. Good old Paul arrives just in time to keep Mrs. Webster’s virtue in tact.

Paul delivers Joyce safely back to The Cypresses, but not before she finally gets a load of those scales growing all over his face. It turns out that Paul has become the victim of medical experimentation gone horribly awry (reptile limb regeneration anyone?). Local mad scientist Dr. Sinclair is convinced he can revert the process, but no one was counting on Mannon to run screaming into the laboratory, "I'll kill you alligator man! Just like I'd kill any four-legged gator! Ya hear me? I'll kill ya!"

It’s all down hill from there. Mannon botched the experiment and the make-up department ushers in the piece de resistance, a bad rubber alligator head… and I mean, really bad. Seeing is believing folks, but I’ve indulged enough spoilers today so you’ll just have to rent this masterpiece of monster mish mash yourself.

In all fairness, it’s not nearly as bad as I make it out to be. Okay, maybe it is. But as is often the case with movies like this, irresistible camp trash is in the eye of the beholder. This is one of those treasures I like to trot out on lazy Sunday afternoons. After all, what else am I going to do? Watch football? 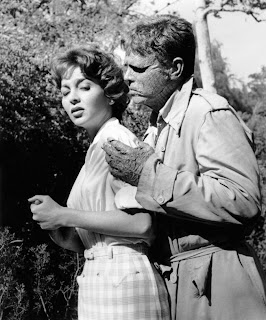 Posted by Barrymore Tebbs at 12:13 PM