Dumber of the Beast: The Mephisto Waltz by Fred Mustard Stewart

Here’s another “classic” piece of late 60s quasi-Satanic hooey, Fred Mustard Stewart’s debut novel, The Mephisto Waltz. Just look at the reviews on the cover of the 1970 Signet paperback:
A gripping ride into a world of Satanism and Black Magic… impossible to put down. – Saturday Review

Mr. Stewart weaves his eerie plot with diabolical skill. The Mephisto Waltz is a must for every addict of the Satanic and the supernatural. – New York Times Book Review

A Bizarre, unique, and diabolical tale involving sorcery, Satanism, and transmigration of the soul… a devilishly powerful spellbinder. – Chronicle

The delightful horror and the Satanic elements of Rosemary’s Baby, with the suspense carried on a more sinuously fluid prose. - Library Journal 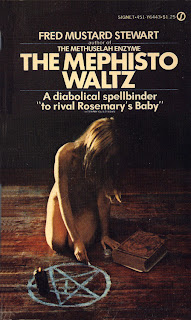 Sinuously fluid prose? I don’t think so. And please, don’t imply it’s better than Rosemary’s Baby. Ira Levin writes with sinuously fluid prose. Fred Mustard Stewart does not. And any suspense is killed at the end of the first act when the author flat out tells the reader the whole business is about the aforementioned transmigration of the soul right down to the Satanic “ritual”. The rest of the book follows the heroine trying to catch up. Stewart also has little skill in the character department. Miles and Paula Clarkson are about as bland as they come, presenting nothing with which the reader can relate. Oh yeah, my husband is involved with a group of Satanists – I can relate to that.

In case you haven’t seen the clunky movie with Alan Alda, Jacqueline Bisset, Barbara Parkins, and Curt Jergens as the menacing Duncan Ely, the story goes something like this:

Journalist Miles scores an interview with the aging concert pianist, Duncan Ely who immediately takes a fatherly interest in Miles’ own failed career on the concert circus. Next thing you know, Duncan and his lover…ahem, I mean daughter… whip out a bottle of Satanic oil and start mumbo jumboing in Latin and, voila, Paula has a feeling her husband ain’t her husband any more. Stewart throws in the usual business: murdered ex-wives, dead babies, a black dog, the Old Religion reinvented as Satanism, and a mysterious Man in a Bowler Hat.

Stewart scores a few points in the research department. He at least knows his stuff when it comes to the piano and piano music, describing the “sound” of the titular waltz. Late in the book, Paula browses Ely’s library of Satanic tomes and Stewart lists a catalog of essential titles in the Black Magic oeuvre, everything from Malleus Maleficarum to Discourse of the Subtill Practices of Devilles.

If you’re into this sort of Satanic silliness, The Mephisto Waltz can be a fun, two-night read, although it left this reviewer wanting much more. If you only ninety minutes or so to spare, check out the movie. It’s just as bad.
Posted by Barrymore Tebbs at 5:48 PM