They just don’t write them like this anymore: horror with nothing supernatural in it; lean, mean literary prose that is never pretentious and never bogs down in “style”; a taut narrative that deceptively leads the reader down one terrifying path only to completely pull the rug out from under him in the final act and deliver something far more terrifying than at first would have been thought possible.

Rereading Craig Jones’ remarkable 1978 novel, Blood Secrets after more than thirty years was one of the highlights of my summer. Initially, I didn’t think it qualified for inclusion in The Midnight Room, but the story has stuck with me like a bad sunburned that itches for months afterwards. This is the sort of book that many current authors working in the field of psychological suspense would benefit from studying.

You never think this kind of thing really happens to people who’ve been to college. So begins the first person narrative of Irene Rutledge, an intelligent woman from an intelligent family working on her PhD. From the first page we know she has committed a crime. What follows is a compulsively readable tale as mesmerizing as a slow moving train wreck.

Irene is a beautiful red head, the sort of young woman who could have any man on her college campus. But much to the chagrin of her best friend, and the reader’s, she chooses a lanky, awkward weirdo named Frank Rutledge. Frank is at first resistant, and all along we keep telling Irene to leave him alone. He’s keeping you at bay for a reason. Nothing good will come of this. But Irene ignores our better judgment, marries the man, and the crazies start to come out of the woodwork. First, there is Frank’s sister, Vivian, who sets Irene’s mind reeling with implications of family relationships gone wrong. Then there is Frank and Irene’s daughter, , who couldn’t be more pathologically sub human if she tried. Things only get worse from there.

No biographical information on Mr. Jones is forthcoming other than his name being the by-line for a movie tie-in of the film, Fatal Attraction. My paperback edition of Blood Secrets is a reprint of a Harper and Row hardback which suggests two things. The first is that Jones might be a pseudonym for an author who wanted his (or her) identity kept far removed from this sordid little shocker. The second is that the hardback may be readily available in the stacks at libraries across the country. If you’re lucky to find it in your town, grab it and read it. If not, keep an eye out for it at used book stores (I found mine for a dollar) and on eBay (there are plenty of copies to go around at affordable prices.”

At 229 pages, this is definitely one that you will stay up late reading. Blood Secrets has my highest recommendation. 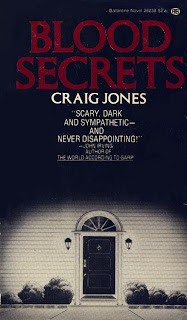 Posted by Barrymore Tebbs at 9:30 AM