Time slips away too quickly lately. socializing rears its attractive head. I have a number of writing projects all demanding my attention simultaneously. And with good intentions, I have a pile of notes and ideas for future blog posts and a stack of movies collecting dust on top of my DVD player to be reviewed.

Which brings me back around to where I was a some weeks back – ready to burn through a stack of classic ghost stories on DVD.  The Japanese influence on the ghost story in American cinema over the past ten years is on the wane, if the success of Hammer’s The Woman in Black and its in-development follow up is any indication. In researching ghost stories on film, I’m finding it is not a well represented branch of the horror genre. While these types of stories work best in oral and written form, I don’t think they will ever truly go out of style. Our modern idea of the ghost story has its origin in pre-Christian eras when man told tales of ancestor worship around the fire while shadows flickered on the cave walls.

Peter Medak’s 1980 film, The Changeling, is a fine example of a ghost story (and horror film) that did not become a victim of its time. In an era when R rated horror was the norm, The Changeling is blessedly free of blood, sex, and four letter words, choosing instead to present its story the old fashioned way – but implication alone. 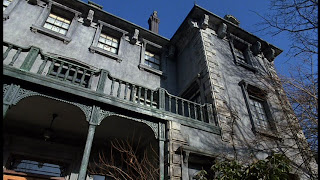 The script by Russell Hunter and William Gray (allegedly based on Hunter’s personal experiences) follows the classic pattern that Gothic novelist Barbara Michaels handled so well throughout the 1970s – that of a desperate spirit reaching across the years for understanding and vengeance. 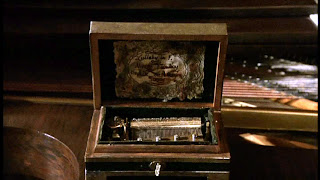 I’ve often said that this type of haunting works best when the main character is at a vulnerable crossroad in life. Here we have composer John Russell grieving the sudden, tragic death of his wife and child, who becomes a barometer for spiritual manifestations when he moves into an old mansion in . Straight away, Russell (believably portrayed by George C. Scott) sets to work composing a new symphony based upon a musical motif that surfaces in his subconscious soon after moving into the house. The ghostly manifestations are a sly, slow build up. At first, Russell, being a practical man, is unable to understand the significance of slightly off-kilter events in the house, until the ghost literally makes itself known by throwing rocks at Russell in the yard. Russell soon uncovers a secret attic room where he finds a music box which plays the same melody, note for note, that formed the structural basis of his symphony. 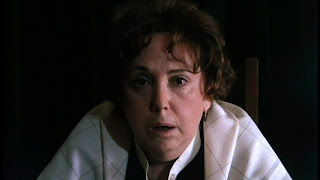 From this point on, Russell becomes more in tune with the sprit in the house and the story turns into a sort of supernatural detective story. I won’t divulge the intricacies of the plot any further, but feel compelled to point out that the séance scene in The Changeling is one of the most convincing and spine tingling I have ever seen on film. 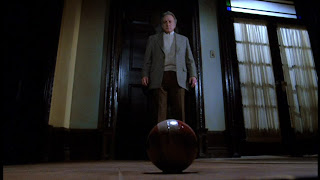 The Changeling has long been a cult favorite among friends of mine who enjoy good old fashioned supernatural thrillers. The DVD has never gone out of print, and is easily had from Amazon and other retailers for a reasonable price. Ghost stories are an enjoyable past time on cold, dark nights during the northern hemisphere’s wintry season. Treat yourself to something old… and don’t forget to turn off the lights.
Posted by Barrymore Tebbs at 9:36 AM

Email ThisBlogThis!Share to TwitterShare to FacebookShare to Pinterest
Labels: Barbara Michaels, Ghost Story, The Changeling, The Woman in Black