About twenty years ago I stumbled on a video company called Sinister Cinema which specialized in public domain films of every exploitation genre imaginable: old movie serials, juvenile delinquent, sword and sandal, poverty row mysteries, bottom of the barrel sci-fi, and of course, horror. I was eager to get my hands on copies of some of the more obscure films I had watched on Scream In when I was a kid, movies like Black Sunday and Terror in the Crypt. Once I started ordering from the catalog, I was hooked and picked up some fun things as well like Roger Corman’s Swamp Women, Ed Wood Jr’s Jail Bait, and a campy hoot called Teenage Devil Dolls. But the real excitement for me was the chance to finally see some of the legendary and, until then, unattainable Barbara Steele flicks such as and The Terror of Dr. Hichcock.

Today, my collection of VHS tapes from Sinister Cinema is buried in a box in my basement. Since the advent of DVD, there have been a number of film companies who have gone to great lengths to painstakingly restore some of these gems. Hichcock remains unattainable, but in 2002 Synapse Films remastered and fully restored the wonderful entry in Italian Gothic cinema, 1962’s Danza Macabre, better known as stateside, restoring bits of risqué dialogue and some brief female nudity. 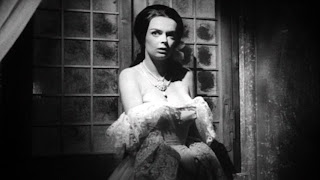 purports to be based on an Edgar Allan Poe story. It bears some resemblance to his story Never Bet the Devil Your Head, but beyond that it is strictly a fabrication of screenwriters Sergio Corbucci and Giovanni Grimaldi. Like the American counterparts filmed by Roger Corman, Castle of Blood doesn’t adapt Poe as much as it captures the dreamlike quality and sometimes hallucinatory feel of his work. 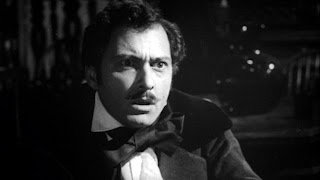 Poe himself appears in the prelude at the of the Four Devils, where he is being interviewed by British journalist Alan Foster. In the tavern, Poe and Foster meet Lord Thomas Blackwood who offers Alan Foster one hundred pounds if he can survive the night at the haunted Blackwood family castle. Foster accepts the wager, Poe and Blackwood drop him off at the estate and the fun begins. 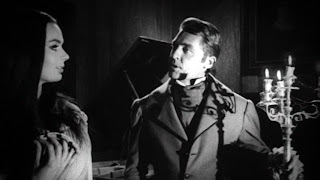 Visually, like most of the other Italian Gothics from the early 1960s, Castle of Blood takes its cue from Corman – we are treated to plenty of cobwebs and candelabras, mysterious piano music, and drop dead gorgeous babes, most notably Barbara Steele who somehow cornered the market on haunted Gothic heroines in many of these films. Like most boys my age who were mesmerized by her Gothic glamour, I’ve had a lifelong obsession with the actress and her films to the point where the dead heroine of my novel, The Haunting at Blackwood Hall, is not only named after Steele’s character of Elizabeth Blackwood from Castle of Blood, but possesses her physical description as well. 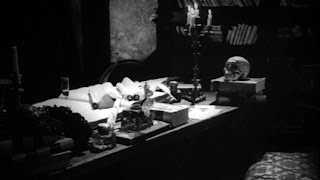 is slow moving by today’s standards, but it positively drips with Gothic aura in its tale of a house full of ghosts who relive the last five minutes of their lives every night at midnight. While the movie has several long passages of the characters wandering through the cobwebs with eerie music playing on the soundtrack, we are also treated to some stunning outbursts of violence and even a bit of lesbian erotica. Due to the slow pacing, is not necessarily to everyone’s taste. But if you are a lover of cinema as visual art and ready to tackle something different in the Gothic genre, please give a try. The Synapse release is still available from Amazon. 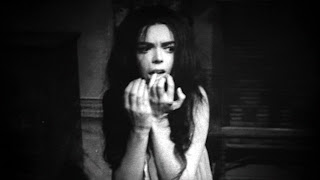 I realized I have been writing this blog for well over a year now and have not yet touched on the Italian branch of Gothic horror films. Expect more in the weeks and months ahead.

Posted by Barrymore Tebbs at 9:04 AM