Broomsticks and All That: Night of the Demon (1957) 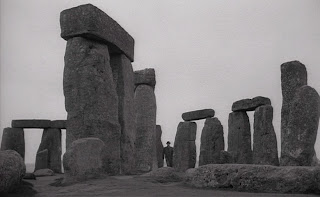 One of the many things I love about this late 50s shocker is how unapologetic it is about its belief in demonology and the supernatural. Dr. Holden may not believe in witchcraft, but the film – and all the other characters in it – do. Right from the beginning, a somber voice over tells us, “It has been written since the beginning of time, even unto these ancient stones, that evil supernatural creatures exist in a world of darkness. And it is also said man using the magic power of the ancient runic symbols can call forth these powers of darkness, the demons of Hell.” 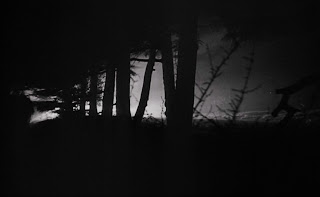 Intrepid psychologist John Holden (the stoic Dana Andrews) travels in England to attend a convention investigating international reports of paranormal psychology, with plans to debunk the Karswell Devil Cult as the product of mass psychosis. Upon his arrival he learns that one of his British compatriots, Professor Harrington, has met a grisly end by being electrocuted when his car crashes into a telephone pole. What the audience knows from the beginning is that Harrington was pursued to his death by a monstrous fire demon, summoned by satanic madman Julian Karswell via a pesky parchment scribed with runic symbols, a parchment that seems to have a mind of its own, bringing terror and death to every hand it touches. Night of the Demon was quite daring in its day, presenting lurid elements of devil worship and demonology to international audiences. 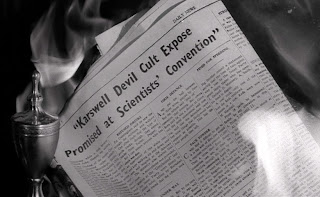 Thanks to outstanding black and white cinematography and the direction of Jacques Tourneur who filmed the Val Lewton classics Cat People and I Walked with a Zombie, Night of the Demon builds suspense through a series of brilliantly staged sequences that thrill simply through the power of suggestion alone – menacing hallways, a trip to misty Stonehenge, drawing room séances and hypnotic trances – and our hero’s pursuit by an unseen force through the forest surrounding Karswell Hall. As if the plot isn’t heady enough with its talk of devil cults, fire demons, “broomsticks and all that”, the soundtrack music is deliciously bombastic 50s horror movie cheese – crank it up loud enough and your neighbors will wonder what kind of devil’s business you’re up to. 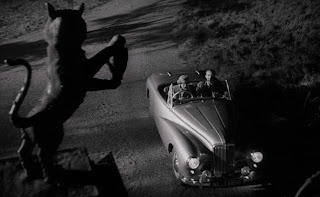 Some detractors of the movie say its downfall is the full frontal viewing of the demon itself. It’s a garish, stop-motion puppet not unlike the beasts Ray Harryhausen modeled for the old Sinbad movies. There are varying accounts of whether Tourneur planned to include the demon all along, or if he was forced by the studio against his well. But to those who say its appearance is corny and ruins the film I would like to point out the rubber dummy in The Exorcist that cranks its head around and plays hide and go seek with a crucifix. For my money, the only downfall of the movie is the rather wooden performance of Dana Andrews as John Holden. Andrews’s brand of stoic American hero doesn’t merge well with the outstanding performances of the otherwise all-British cast. But even if someone of Charlton Heston’s caliber had played the role, the incongruous effect would probably have been much the same. 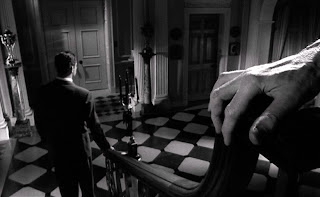 I don’t remember seeing this one when I was a kid, but I picked up a VHS copy in a video bargain bin in the early 80s, one complete with an artist’s full color rendition of the fire demon, thinking I was in for some silly bit of ‘50s schlock. Night of the Demon has been a favorite ever since. It is still readily available on DVD in two versions, the original 95 minute British version, and the slightly cut 82 minute American release print under the title Curse of the Demon. Either way, you’re in for a hell of a good time! 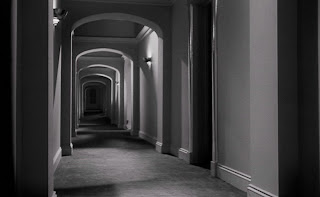 Posted by Barrymore Tebbs at 7:42 AM

Email ThisBlogThis!Share to TwitterShare to FacebookShare to Pinterest
Labels: Cat People, Curse of the Demon, I Walked with a Zombie, Jacques Tourner, Night of the Demon, Satanic Madmen, Satanism, The Exorcist, Val Lewton