Folks at my day job love to talk about TV shows and give me stink-eye when I tell them I don’t watch TV. Sorry I can't discuss last night's episode around the water cooler - I have books to write. I can squeeze in Downton Abbey once a year, but I’ve pretty much lost interest in True Blood. Game of Thrones and Boardwalk Empire just aren’t my thing.

Then along comes Bates Motel, and a trusted, Gothic-wired friend who has been following it encouraged me to watch. I’m not exactly opposed to exploring the back story of Norman and his mother, and I like the fact that they live in the correct house complete to its period furnishings, but Bates Motel fails to work for me on a number of levels.

First and foremost is the predictability of the script. From the moment the creepy relative of the former motel owner shows up, I knew he was coming back after dark to cause havoc. From the moment the sheriff and his deputy show up, I knew the suspicious one would put Norma through the ringer, and Norma and the pretty one would get the hook up. From the moment the girl with CF showed up, I knew was going to go for her and not the daddies’ girls with straightened blond hair. The success of nearly every TV series that has captured viewer’s interest en masse over the past decade has been grounded in unpredictability. Bates Motel plays like a retread of every bad 80s horror movie. Here, that’s not a good thing.

To add salt to the wound of bad writing, I found the graphic rape scene in extremely poor taste. But I was more offended by Norman and Norma’s lack of emotional response and subsequent psychological fall out. The post-rape scenes as written, as well as the actors’ performance, were appallingly underplayed. In the world of Bates Motel, a violent sexual assault and subsequent murder is taken in stride, just another day on the job, just another dead body to wrap in carpet and dump in the swamp.

I made it through the second episode, but it was only more of the same. I won’t be watching more. With the level of quality competition in cable TV series these days, I expect a show to hit the ground running. Bates Motel doesn’t seem to know what genre it is. Is it murder mystery? Is it horror? Is it paranormal? It’s certainly not psychological thriller, which is what it should be. Bates Motel should take a cue from a show like The Killing, a relentlessly grim psychological thriller/murder mystery. Obviously, the Bloch estate sold the rights to the characters, but nothing in this series’ exploration of the insidious relationship between a savage killer with MPD and his sexually repressed, religious fanatic of a mother does any justice to the Robert Bloch characters we know and love via the Hitchcock film.

In the words of the late Roger Ebert, two thumbs down. 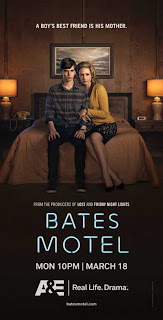 Posted by Barrymore Tebbs at 6:32 PM